The Great Martyr George, our Patron and Protector 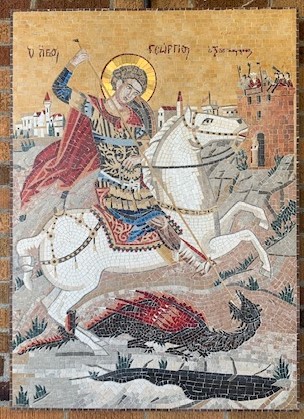 The saints of the church, who are alive in Christ, are not only models whose lives and devotion to God we should strive to emulate, but also are intercessors to God. Individual faithful and parish communities are called upon to take a patron saint, in the tradition of the Holy Orthodox Church. Early churches were built at the site of the graves of many of the Holy Martyrs. These communities were dedicated with the name of the martyr, and he or she was called upon by the community who worshiped there to act as an intercessor and protector for the faithful. Churches today place relics of the saints inside the Altar table as well as in places for veneration in the church in remembrance of these holy men and women in our lives.

The Holy and Great Martyr George.

This renowned and glorious martyr was born in Cappadocia, the son of rich and God-fearing parents. His father suffered for Christ, after which his mother moved to Palestine. When George grew up, he went into the army, in which he rose, by the age of twenty, to the rank of tribune, and as such was in service under the Emperor Diocletian. When this Emperor began a terrible persecution of Christians, George came before him and boldly confessed that he was a Christian. The Emperor threw him into prison, and commanded that his feet be put in the stocks and a heavy weight placed on his chest. After that, he commanded that he be bound on a wheel, under which was a board with great nails protruding, and thus be turned. He then had him buried in a pit with only his head above the ground, and left there for three days and nights. Then, through some magician, he gave him deadly poison, but in the face of all these tortures, George prayed unceasingly to God, and God healed him instantly and saved him from death, to the great amazement of the people. When he also raised a dead man to life by his prayers, many embraced the Christian faith. Among these was the Emperor's wife, Alexandra, and the chief pagan priest, Athanasius, the governor Glycerius and Valerius, Donatus and Therinus. Finally, the Emperor commanded that George and the Empress Alexandra be beheaded. Blessed Alexandra died on the scaffold before being killed, and St George was beheaded. This happened in the year 303. The miracles that have been performed at his grave are without number. Also are his appearances in dreams to those who, thinking on him, have sought his help, from that time up to the present day. Consumed by love for Christ, it was not difficult for holy George to leave all for this love - his status, wealth and imperial favour, his friends and the whole world. For this love, the Lord rewarded him with a wreath of unfading glory in heaven and on earth, and with eternal life in His Kingdom. The Lord further endowed him with the power to help in need and distress all who honour him and call on his name.

Apolytikion in the Fourth Tone

As the deliverer of captives and the defender of the poor, healer of the infirm, champion of kings, victorious great martyr George, intercede with Christ our God to save our souls.

Kontakion in the Fourth Tone

Thou wast cultivated by God and didst become a most wonderful cultivator of piety, and didst harvest for thyself the sheaves of virtue, for having sown in tears thou didst reap in joy and having withstood to death thou art garnered for Christ. By thy intercessions, O Saint, thou dost obtain for us all remission of our sins.